Last time we have become familiar with the very basics of category theory, and even had a look at some scala code covering isomorphisms. It is time for looking at products, coproducts and the algebra of types.

Universal construction is common in category theory, it is used to define objects in terms of their relationships to other objects. First, we find a pattern, a shape consisting of objects and morphisms, then look at all its occurrences. There might be many, so we have to find a way to rank those so we can pick the best possible candidate, the one that could be considered the best fit, the more authentic, if you like. Let’s meet some of these universal constructions! 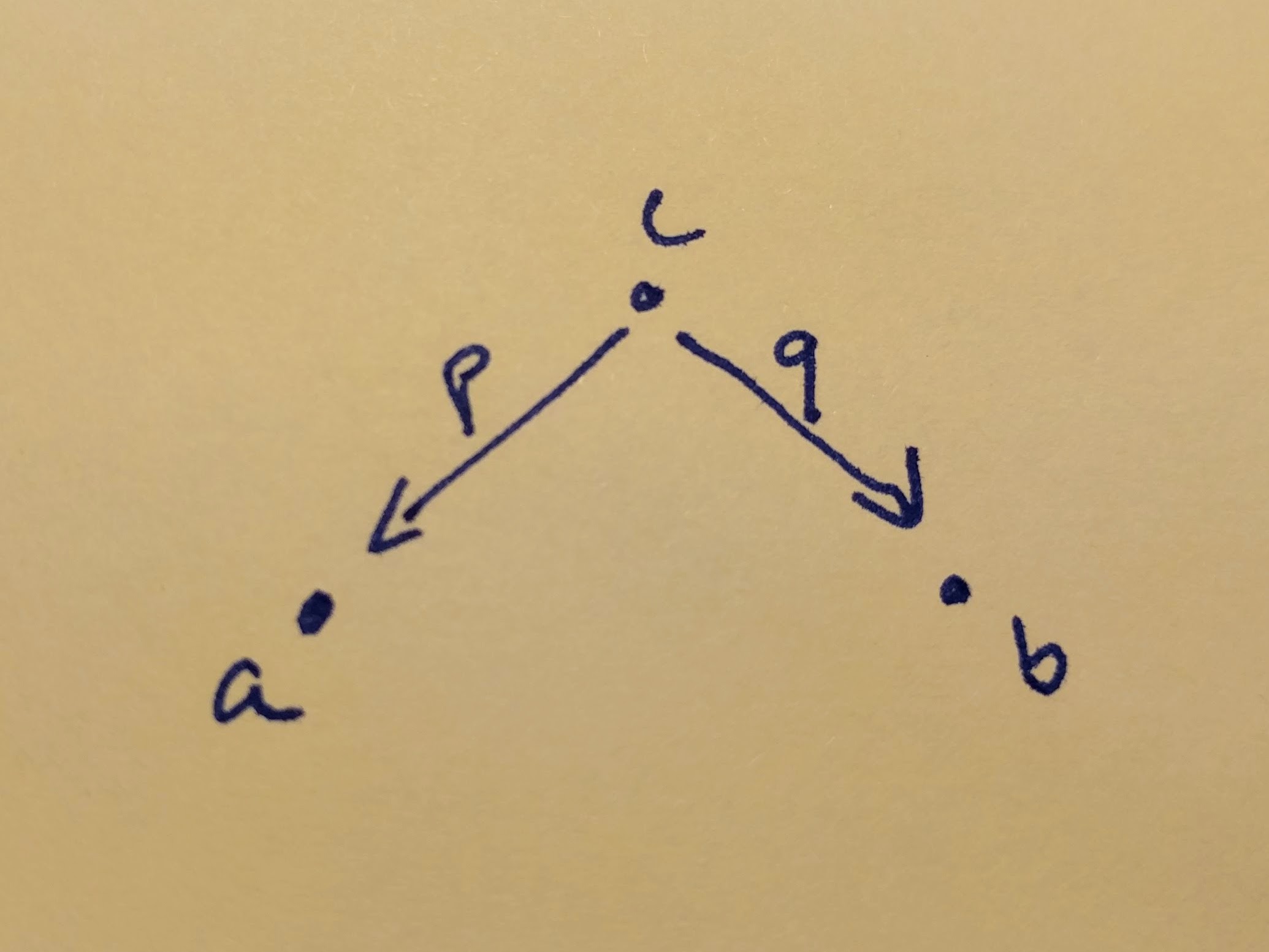 So we say an object is good candidate for being a product of two other objects, if there are two morphisms, two projections to them, which picks the first and the second element of the product. There might be many such candidates for any two given objects and the best one is which has incoming arrows from all the other ones, so we could define the other projections by composition. (Note, that there might be many such ‘best’ candidates too, but that means, that they have arrows toward each other as well, so they are isomorphic!) 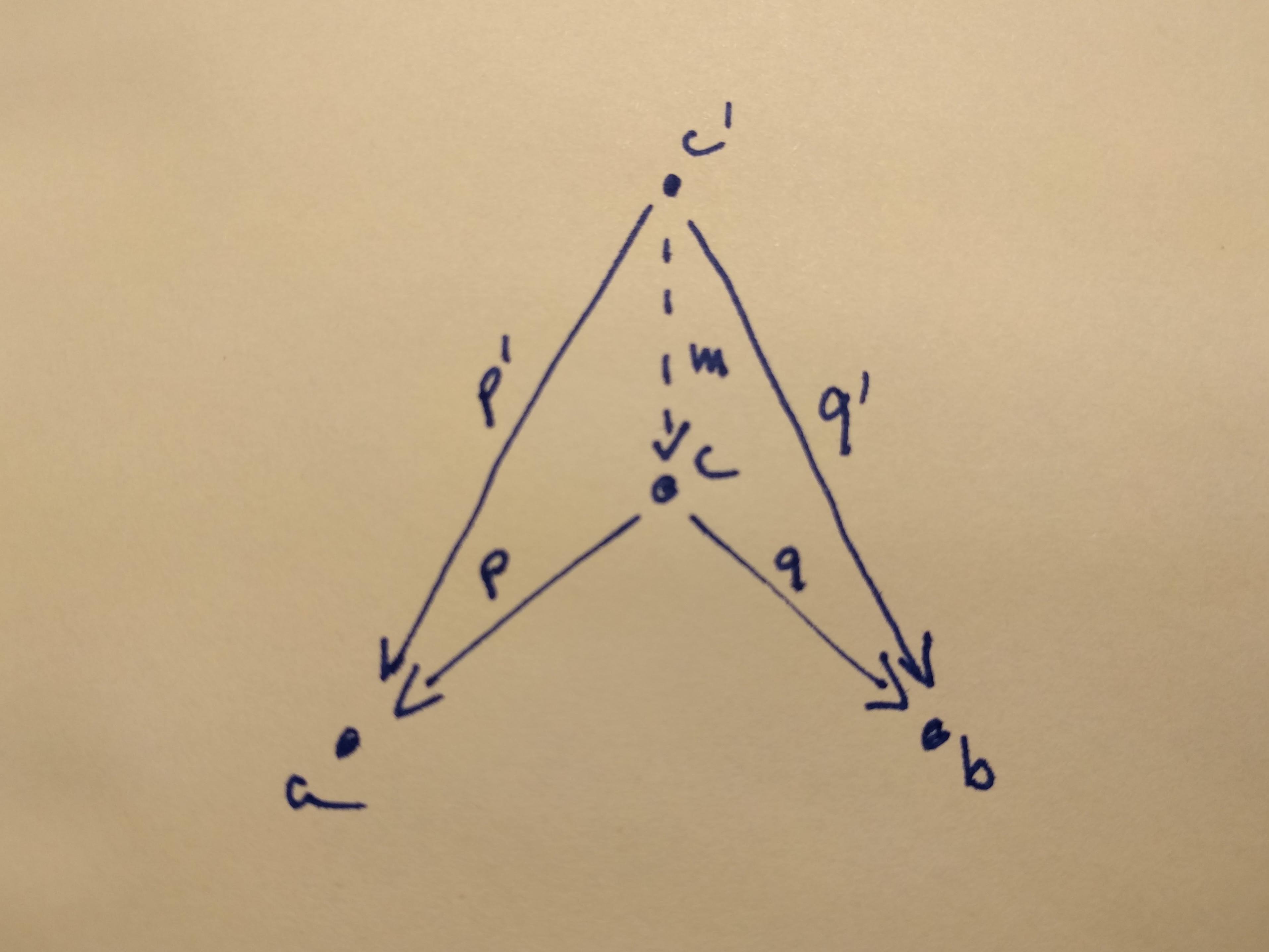 The canonical product type is the Tuple2 in scala. It just pairs two types together. We will use the type alias * for it, because product is like multiplication, right?

In category theory, every construction has a dual, an inverse. If we invert the arrows in the definition of a product, we end up with the object c equipped with two injections from a and b. Ranking two possible candidates is also inverted c is a better candidate than c' if there is a unique morphism from c to c' (so we could define c'’s injections by composition) 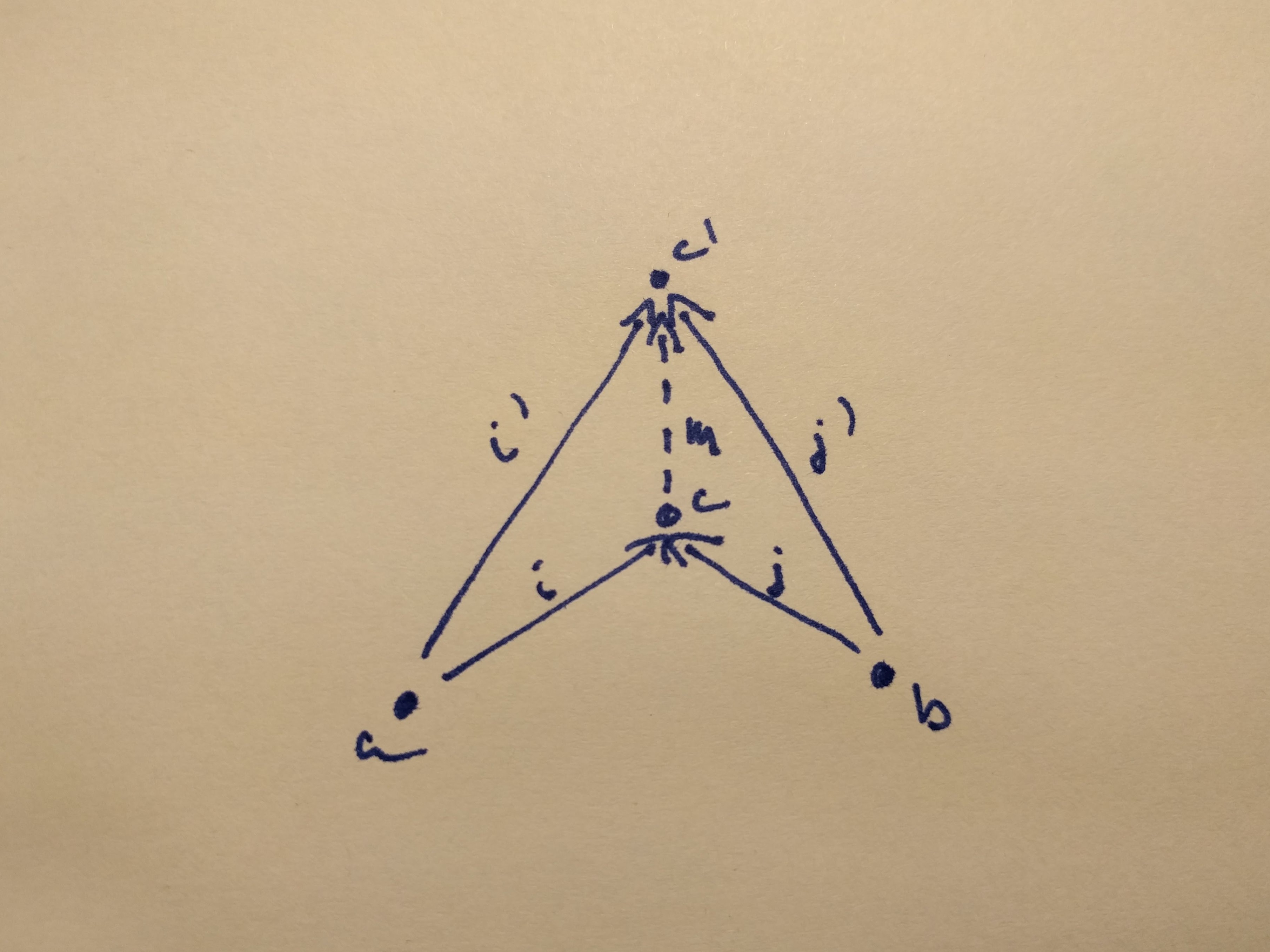 If our objects are sets (as they are in the category of types and functions) then the coproduct is the disjoint union of two sets. It either has an element from one or the other. The canonical implementation in scala is the Either type. We will use the type alias + for it, because they are also called sum types, and indeed, coproduct acts as addition in the algebra of types. 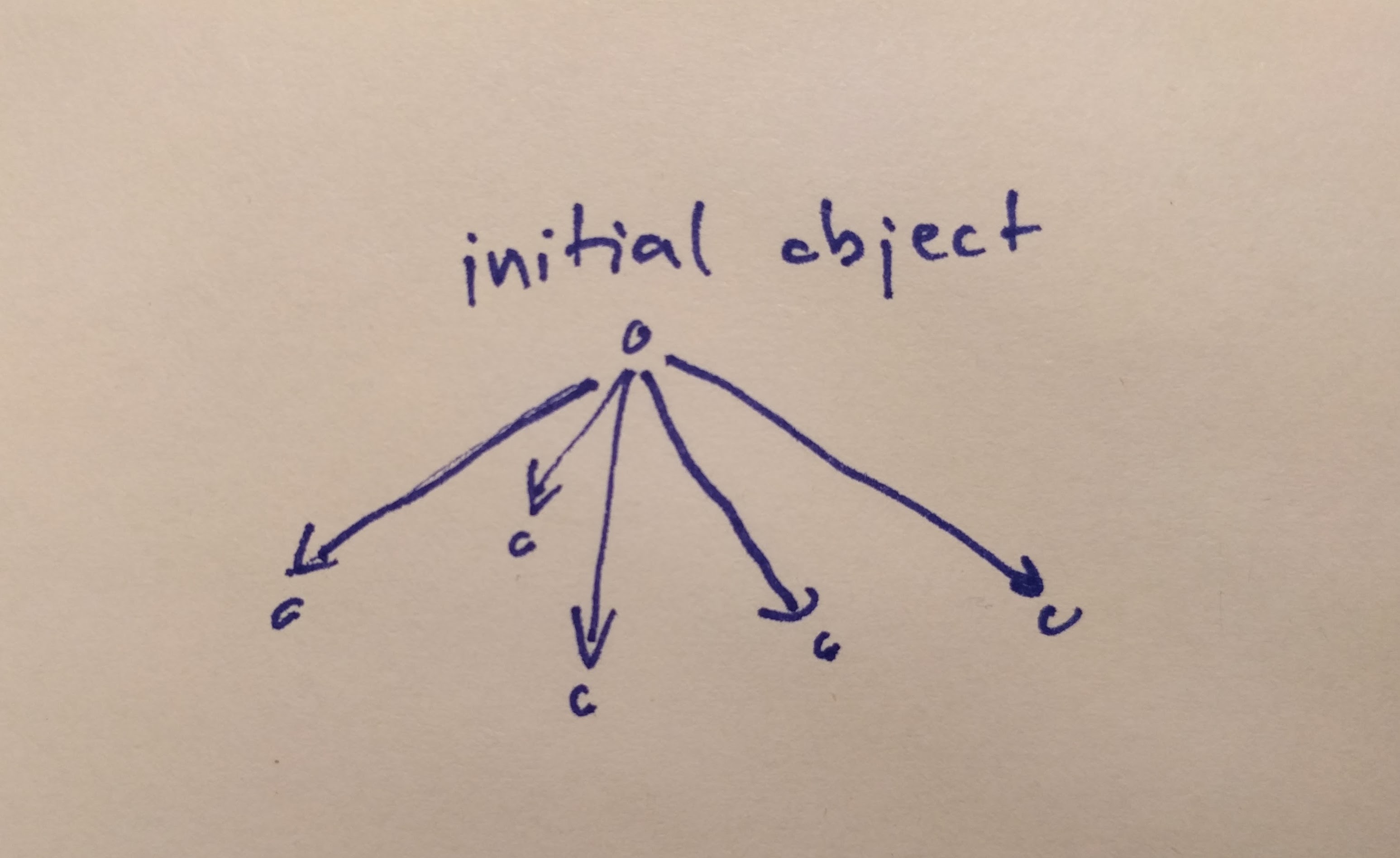 The initial object is the object that has one and only one morphism going to any object in the category.

Again, thinking about types as sets helps here too. In the category of sets, the initial object is the empty set. What type do we know that has no possible values, a type that is uninhabited? In Haskell, this is the type Void, in scala, this could be Nothing.

Reverse the arrows of the initial object, meet the terminal object. 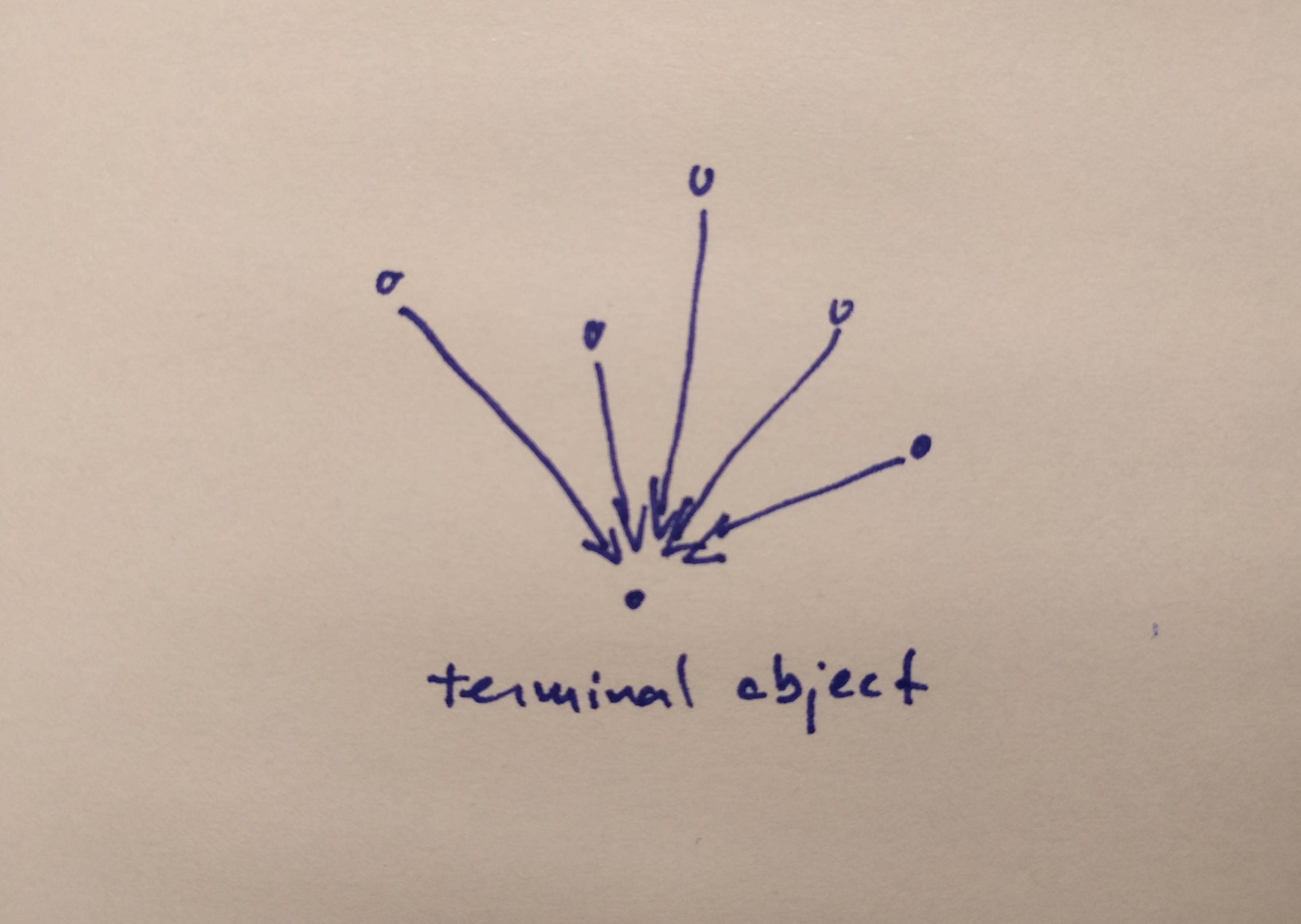 The terminal object is the object with one and only one morphism coming to it from any object in the category.

In the category of sets, this would be the singleton set. What is a type that has only one value? Let’s use Unit for that! The arrow is called unit as well. Here, I provide an implementation too.

Now let’s take a look at some crazy ideas that our objects behave like numbers when we multiply them together with products or when we add them with sums (aka. coproduct).

So we want to prove here, that the two scala types A * B and B * A are somehow equivalent. They are obviously not the same, but that is fine as long as they are isomorphic. What we need to do is swap the elements of a pair, it sounds fairly easy:

Replace the *-s with ,-s above in our heads, isn’t it just a rearrangement how we build up the pairs? Of course it is:

Constructing a product is a binary operation on types. Given it is associative, if we could define a unit for it, an identity element, we could convince ourselves that it is monoidal somehow. Let’s do that. 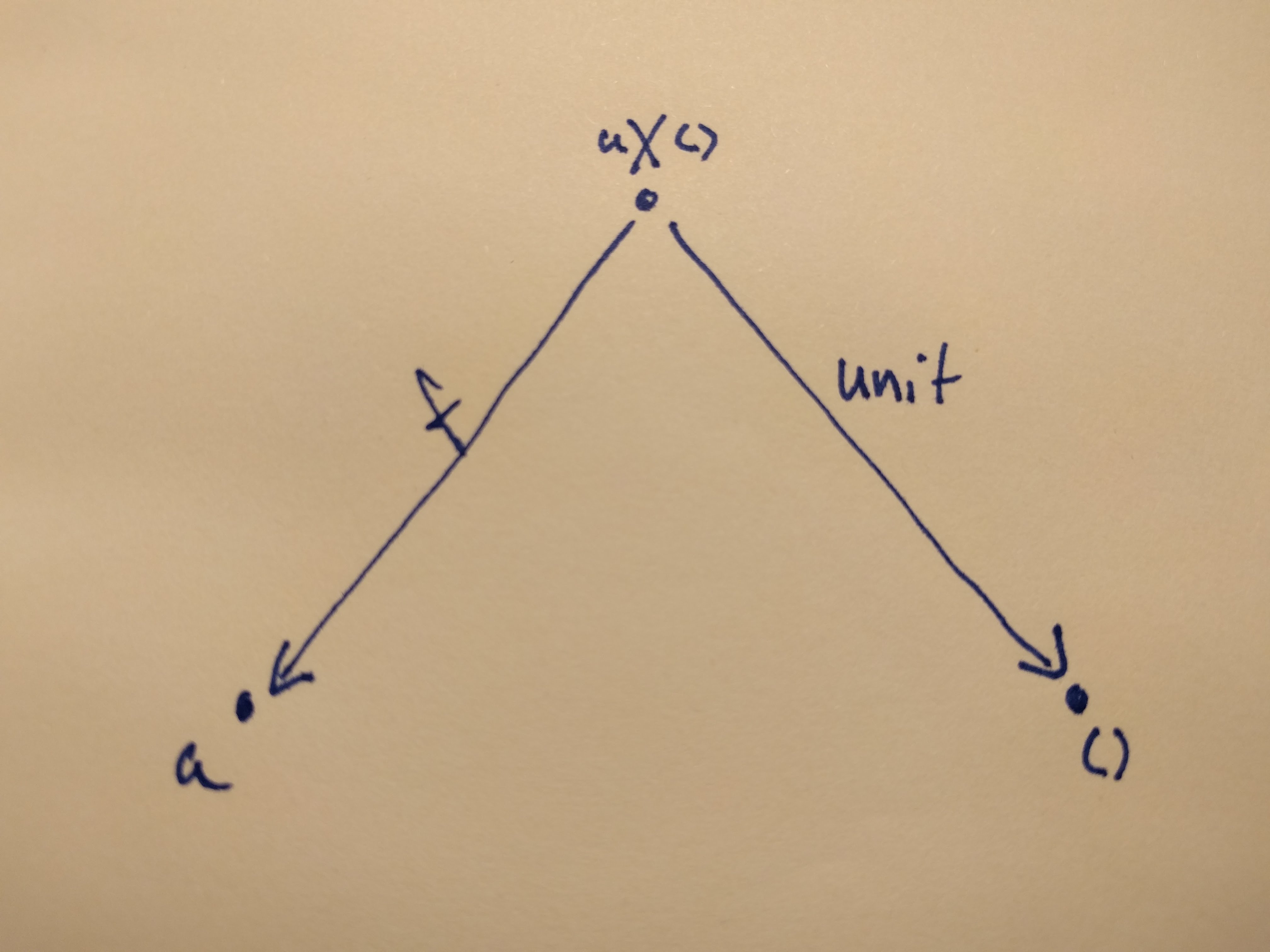 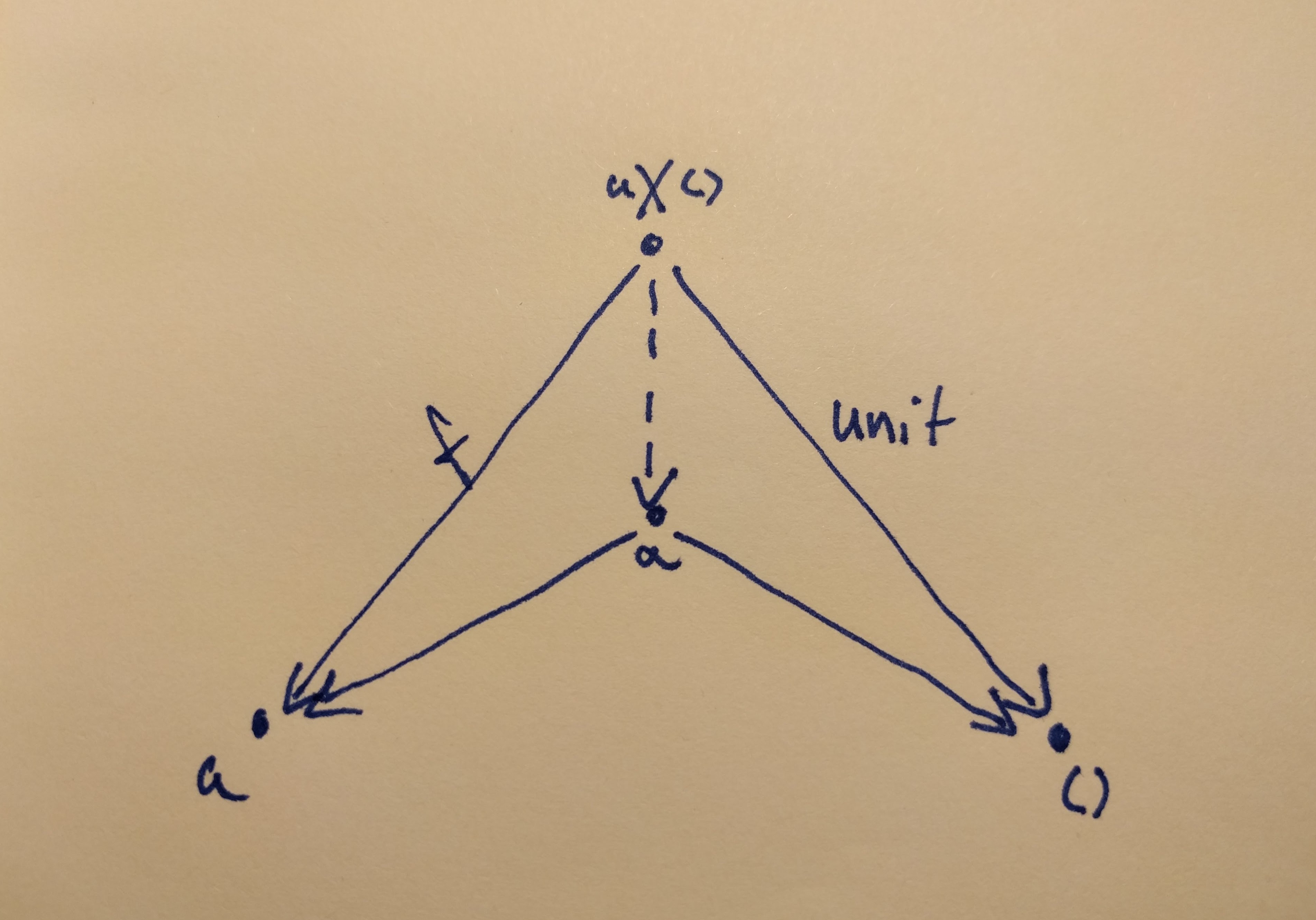 The only thing at our disposal is the universal construction. In order to prove that a is a better candidate, we have to find a morphism from a to a and to the terminal object, and from a x () to a as well. Lucky for us, these morphisms are right there: a to a is id, the terminal object by definition has a unique morphisms from every other object in the category (we called it unit), and as for a x () to a, it is right there, we called if f. 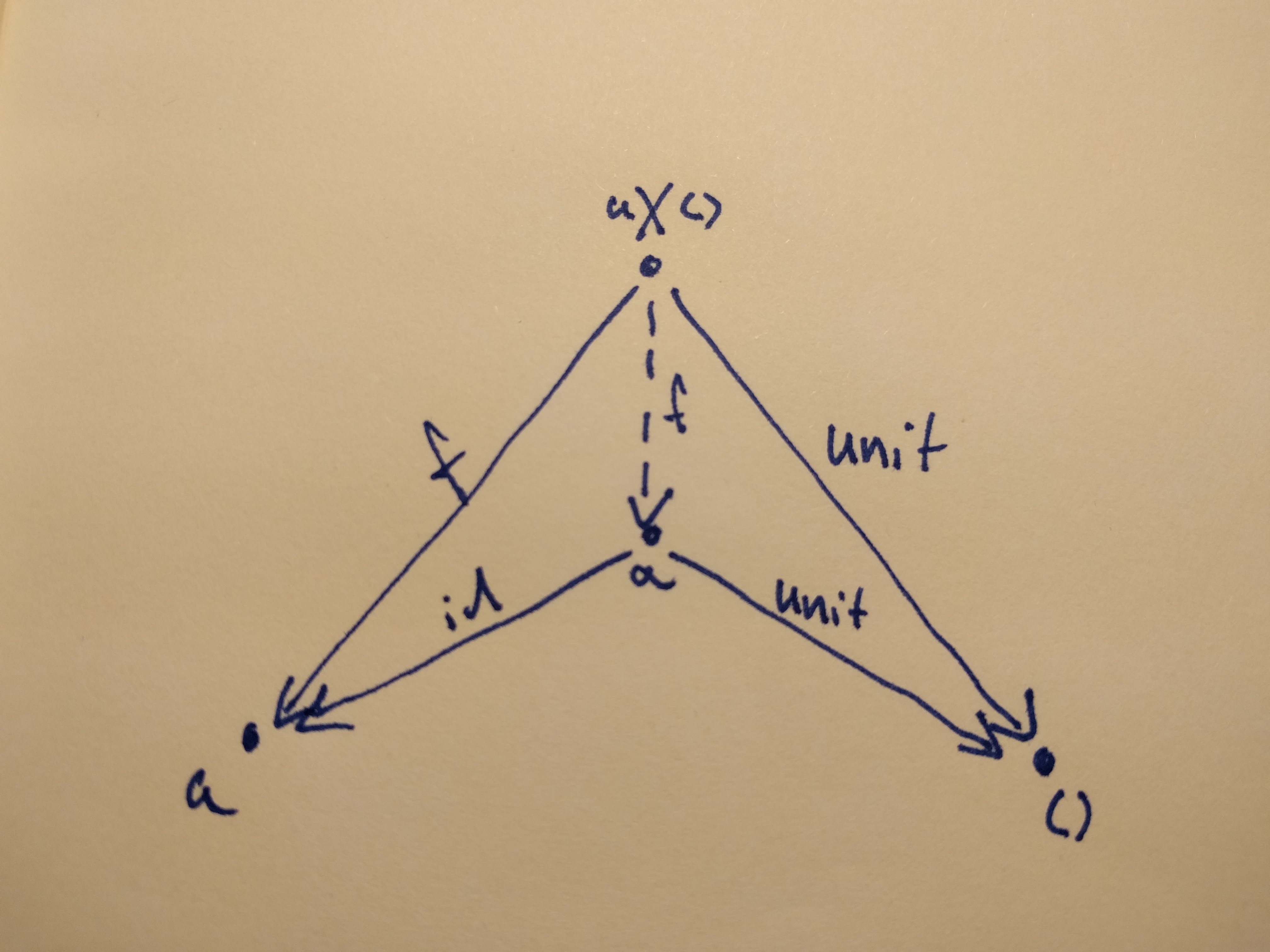 In code, we want to show that A * 1 is isomorphic to A. What is 1 in this? A type with one and only one inhabitant, the terminal object, Unit 1

Based on our experience swap-ping products, this will be easy. Why don’t we call it flip this time?

Again, basically this is just a rearrangement, maybe a bit more verbose, but if we follow the types, the code writes itself. 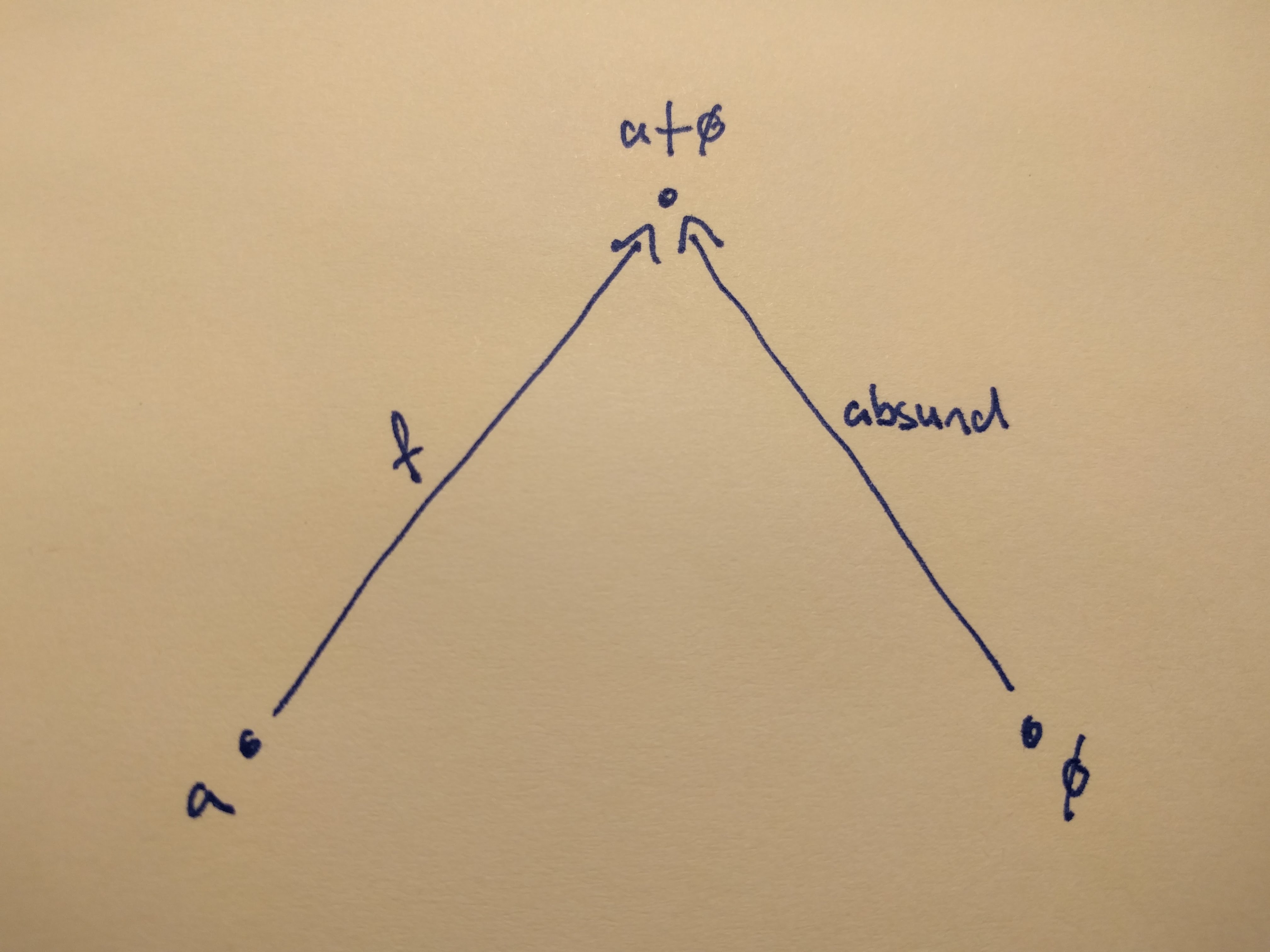 Where ø denotes the initial object. We want to prove that a is a better candidate for a coproduct than a + ø is. 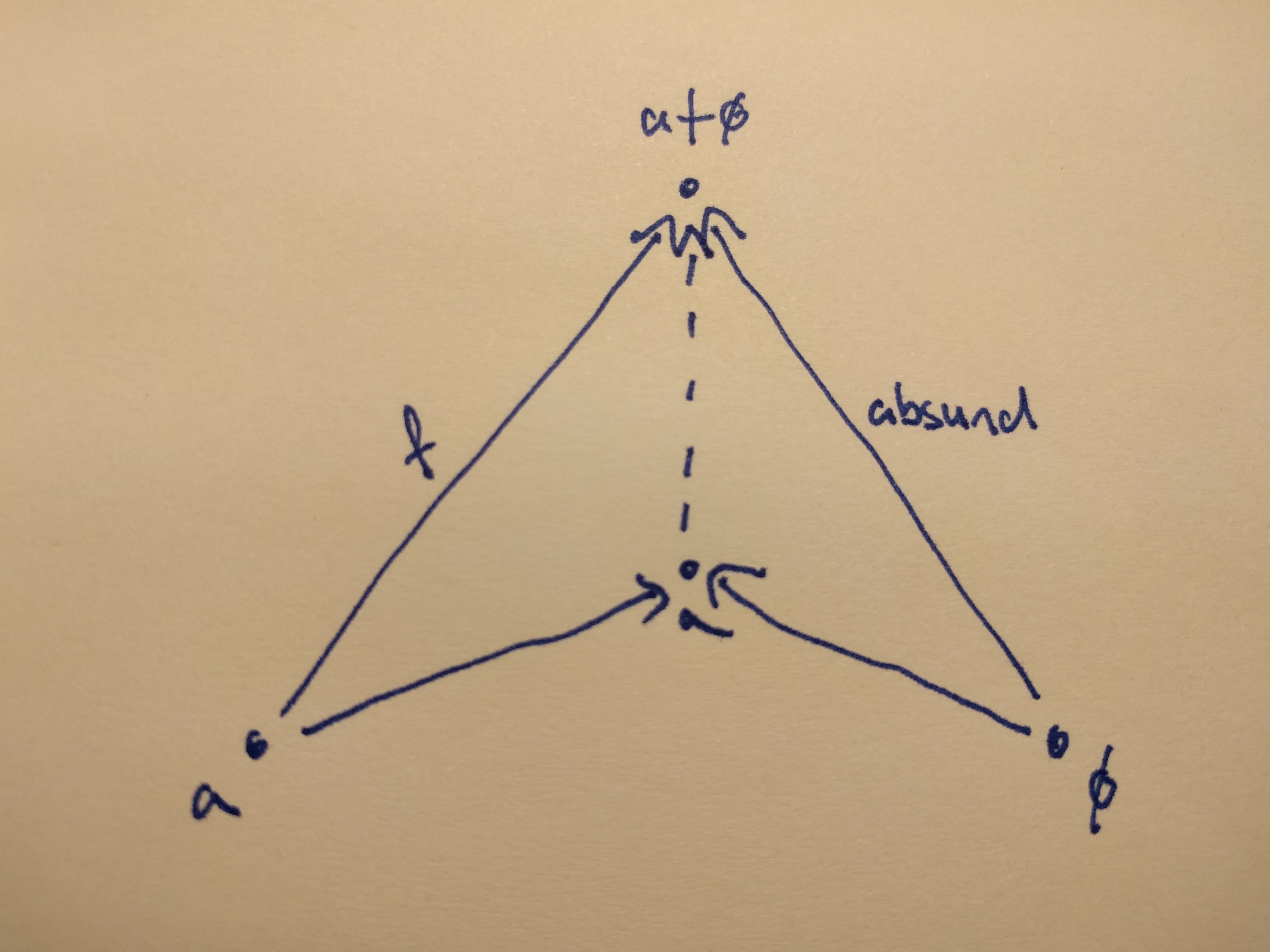 Again, we can only use the universal construction, for which we have to find our injections and a morphism from a to a + ø. And they are, again, right there! 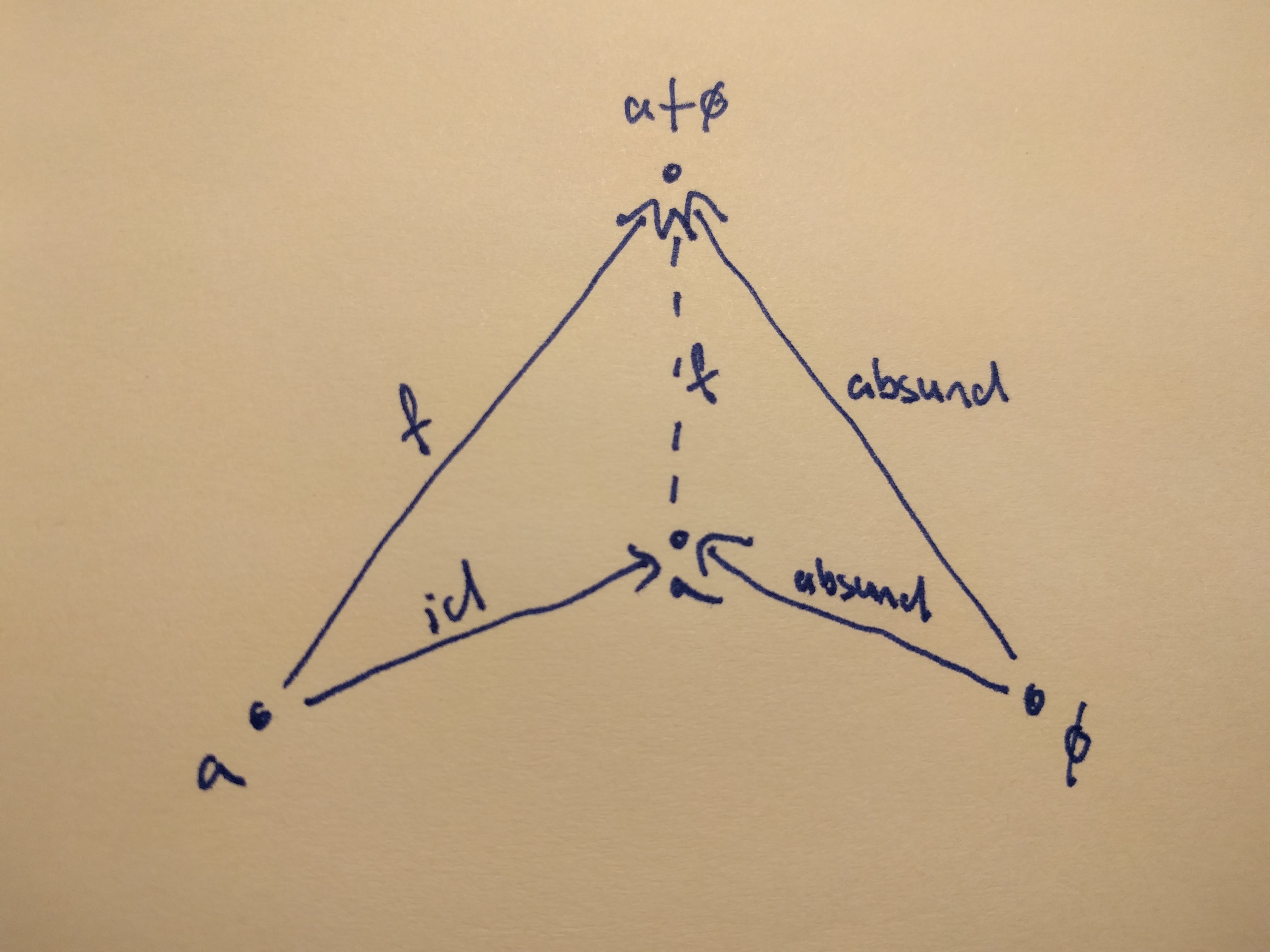 Now regarding the code, we will show that A + 0 is isomorphic to A. We declared Nothing to be our initial object, but, unfortunately, we would get stuck with a compile error2 if we used Nothing for our proof. That’s not a problem, we can come up with an initial object in no time, we just need an uninhabited type. An abstract final class will be perfect.

Now that one is interesting. My first reaction to this was “Noooo waay… but how? …wow, that’s cool”

Algebraic data types are built from products and sums. The product do not have to be implemented as a pair, and the sum do not have to be an Either. We can come up with a product type like this: case class Product[A, B](a: A, b: B) and it is just as fine as the tuple we used before. For sum types, although dotty has a Haskell-like syntax, in scala we use sealed traits for now. For example:

Now we know why they are called algebraic.

Remember what was the first code snippet that was used to try the isomorphism in the [previous post]? We proved that Either[Unit, A] is isomorphic to Option[A]. Option is indeed an algebraic data type, and it is a sum of None (isomorphic to Unit) and Some[A] (isomorphic to A). To use this kind of notation: o(a) = 1 + a

And, indeed, if we use substitution, we define all lists possible:

And so on, and so on. Isn’t it beautiful?

Next time, we will have a look at functors, stay tuned!